It was 1999, when I submitted my first patch. I had started to work with Qt at my job at the university, and was intrigued by it. Programming with Qt was fun and exciting. It was C++ as it was meant to be, and you could do graphical user interfaces in the best way possible at that time. I had heard about the ideas of free software, and of course used a lot of free software already. So I was interested to try writing some myself.

Not really being content with the software I had on the HP-UX workstation I used for most of my work, I thought it would be a good idea to get organized a bit and write a calendar application. A colleague of mine had told me about KDE, which was the shiny new thing back then. So I decided to write "KOrganizer".

Looking a bit closer I realized that KOrganizer was already there. That was a nice surprise. I checked out the source code from CVS, compiled it, ran it, and it crashed immediately. So I began debugging and found a solution. I ran it again, and it crashed later. This was progress, so I submitted my first patch: 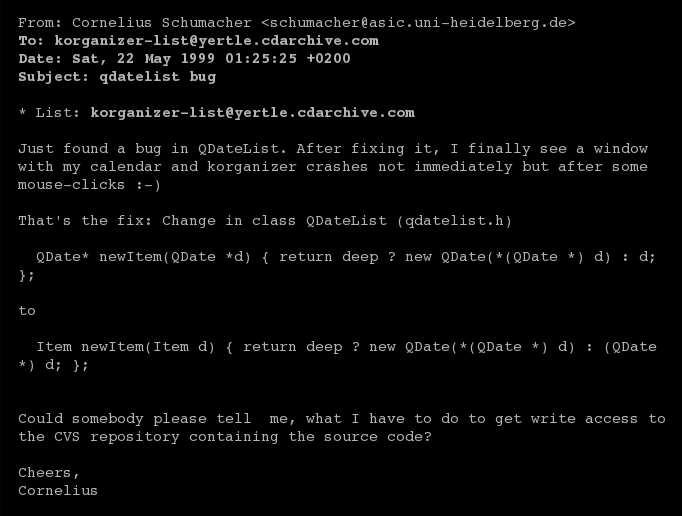 As you can tell, I didn't really have a clue. I told the people on the developer mailing list how to change the one line, which caused the crash. I didn't know about diff and patch. But the patch was accepted and I was hooked.

I continued to work on KOrganizer and was blown away by the community. The people were helpful, passionate, and excellent in what they were doing. It felt like meeting old friends, although we didn't really know each other, and mostly only communicated via the Internet. Personal meetings came later, and the feeling of meeting friends has never gone away. It's part of the magic of free software.

Over the years I wrote a lot of code, maintained frameworks and applications. I learned a lot. I grew into the board of KDE e.V. and am serving as its president now. I met a lot of people in KDE and in many other communities. I got a job working on and with free software, and I'm still doing it. It has been an incredible ride.

This is were I am, precisely fifteen years after I sent my first patch. I wouldn't be here if I wouldn't have sent this first patch. It was the beginning of a journey, which shaped my career and my life. I'm grateful to all the people which I met on this journey and for all what free software gave me.

When do you send your first patch?