One afternoon twenty years ago Matthias Ettrich and Martin Konold sat at a stone table in the cafeteria of the university Tübingen and talked computers. They talked Linux and they talked desktop. They talked about making Linux accessible to everyone. This was the moment where KDE was born. This afternoon they walked away with a mission. Matthias went on to write the call to action to found the KDE project, and Martin to create the very first KDE mailing list kde@fiwi02.wiwi.uni-tuebingen.de. 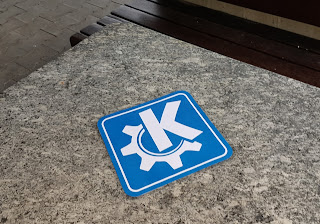 The new project quickly attracted a group of enthusiastic developers and they pushed out code with a frentic pace. kdelibs-0.0.1 was released in November, containing the first classes KConfig and KApplication. In May 1997 the young project presented at the Linux-Kongress in Würzburg. In August Kalle Dalheimer published the famous article about KDE in the German computer magazine c't which attracted a whole generation of KDE developers to the project. On Jul 12th 1998 KDE 1.0 was done and released. The community had not only implemented a friendly face for Linux but also a bunch of applications while going, including a full web browser.

KDE did hundreds more releases over the years, continuously improving and maintaining the growing number of applications and amount of code. The community grew. It started to do annual conferences such as Akademy or the Desktop Summits and focused developer sprints such as the Osnabrück or the Randa meetings. KDE e.V., the organization behind KDE, which was founded as partner for the KDE Free Qt Foundation, grew with the community to be the corner stone of the organizational structure of KDE, using German association law as its secret superpower (read more about this in the book "20 Years of KDE: Past, Present and Future").

Millions and millions of people used KDE software over the years. Thousands of people contributed. KDE made appearances in Hollywood movies, it was subject of theses and scientific studies, and it won many awards. KDE's founder, Matthias Ettrich even received the German Federal Cross of Merit. The timeline of twenty years of KDE is an impressive demonstration of what Free Software is able to achieve.

KDE also was a breeding ground. Many people started their careers there. Hundreds of students went through mentoring programs such as the Summer of Code or the Season of KDE. Whole projects emerged from KDE, such as ownCloud and its sibling NextCloud, Kolab, or KHTML, which turned into WebKit and then Blink, powering most of web browsers on this planet today.

Today Linux has reached world domination in various, sometimes surprising, ways. KDE has contributed its share to that. With Plasma it provides a slick and powerful desktop which does make Linux accessible to everyone. This mission has been accomplished. But there is more. Following KDE's vision of bringing freedom to people's digital life there are amazing projects exploring new areas through Free Software, be it an application such as Krita to bring freedom to digital painters, or a project such as WikiToLearn to create collaborative text books for education. When KDE people meet you can feel the enthusiasm, the openness, and the commitment to change the world to the better just as in the days of the beginning. 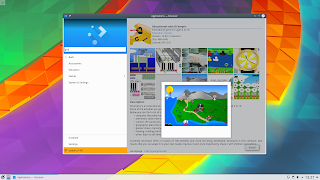 I joined KDE in 1999 with my first patch to KOrganizer. I wrote a lot of code, maintained and founded applications, served on the board of KDE e.V. for nine years. Most importantly I found a lot of friends. Neither my personal nor my professional life would be what it is today without KDE. I owe a lot to this community. Thank you for the last twenty years.