Recently I passed a magic number with my ownCloud in a box appliance. It hit the five fives, 55.555 total downloads, on SUSE Studio. It is the most popular download there. I would never have imagined that so many people would be interested in it and use it when I started with this. Amazing. 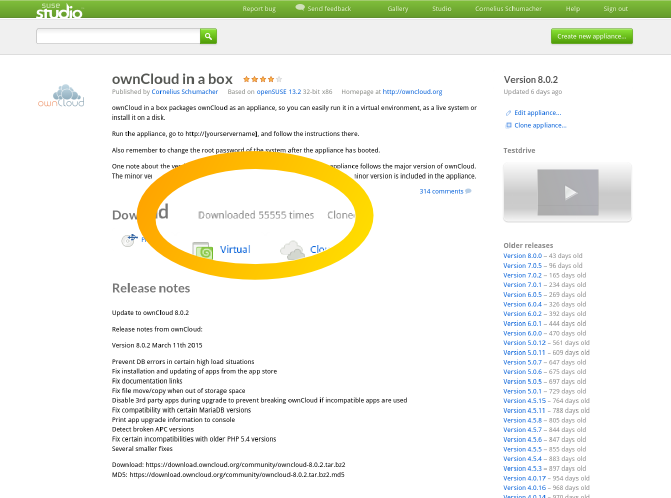 When Frank started to discuss the idea of ownCloud and announced it at Camp KDE five years ago (another five, hooray) I was immediately intrigued. The idea of giving people control about their data in the cloud was powerful. Over the years it actually has gained even more power and relevance, as not only the cloud has become ubiquitous but also the threats to abuse it.

With SUSE Studio it became so easy to build easily deployable images for a broad variety of targets, such as a live CD, a VMware image, or an installation disk for a physical machine, that I just had to do it. It follows along the philosophy of ownCloud to make it as easy as possible to run it, so many people can do it on their own. ownCloud in a box is an easy way to try it and get started.

I'm looking forward to the next fives, whatever they will be. ownCloud has great success, and its development is coming along nicely, but I would still like to see some more things.

From a technical point of view, client-side encryption would allow to use a hosted ownCloud without having to trust who is hosting the server. That would extend the benefit of controlling your data in the cloud to a whole new group of people, who can't or don't want to run their own server. There is some work going on in this area. Let's see where this goes.

From a community point of view it would be great, if the contributor agreement would be a bit more fair towards contributors. It's quite asymmetric. You broadly give all rights on contributions to ownCloud Inc. but only get back what you would get anyway by publishing your code under the AGPL. I understand that this enables the ownCloud Inc. business model, and that a successful company is good for the community. I also have no doubt that the company is operating with the best intentions for the community. But if there needs to be a formal agreement, it would be nice if it would better take into account the interests of both sides. I'm sure there would be ways how to do that without jeopardizing the business model.

In general I'm very impressed with how far ownCloud has come, and I'm happy that I could contribute my little part in it.