It's the sixth day of the Gran Canaria Desktop Summit. I finally have a little bit of time to collect some of the things which I found personally interesting.

It's an intriguing event, lots of stuff going on, lots of people, and the local team is doing a fantastic job with the organization. It's fascinating to see how Akademy and GUADEC happen in an intertwined way. There are many specific sessions dedicated to all the rocking technology our desktops are based on, but there is also lots of room for getting together and mix, so everybody can individually decide about how big the dose of collaboration and cross-desktop pollination is he is going to take. 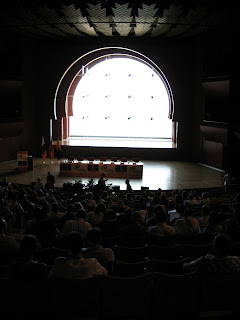 View on the sea from the symphonic hall of the Alfredo Kraus Auditorium, where keynotes and lightning talks took place on Saturday

There was quite some talk about how to move KDE to git. The proposal which seems to be most attractive is to use gitorious.org to host the KDE repositories, which would give us a common space with Qt and some other projects. It was great that Johan and Marius, two of the guys behind Gitorious were at the Desktop Summit, so we could pepper them with questions about Gitorious and discuss how to best make the move. Today was a BoF session about KDE and git, which was so crazily crowded that I decided to look for a quieter place. While doing this I met Vincent, who had the same idea and we talked a bit about the GNOME migration to git. They have creates some good git help and documentation about the move itself. Later I heard that the BoF session was a good success, and that there is a team of people who will take care of what needs to be done. That's great. I'm really looking forward to the move and being able to use git for KDE development.

We also managed to get two sessions about freedesktop.org together. There have been some problems with it because of administrational issues and a lack of transparency and criteria about what actually warrants a freedesktop,org acceptance. Aaron has proposed a solution, this could be a good base for an implementation. The sessions were attended by a wide range of people including developers from KDE, GNOME, and admins of freedesktop.org. There was a broad consensus that we need to fix the admin issues in some way, but that the real issue is one of governance, and we need a better and more transparent way how to express what specifications on freedesktop.org have which state, which are generally adopted and which are just in an incubator state and not yet a real cross-desktop solution and so shouldn't have the freedesktop.org label yet. In the end we came up with a solution. The basic idea is to only accept specifications on freedesktop.org, if they are accepted by two major desktop projects GNOME and KDE represented by their release teams. Details certainly have to be fleshed out, and their also is a need for some more discussion, but in general this feels like the right direction.

An unexpected but very interesting encounter was to meet Jan Lehnhardt and learn something about CouchDB. This is a document-centered database based on JSON with built-in replication. There are all kind of interesting uses cases for it, and the Ubuntu guys seem to plan to rely on it pretty heavily. Worth looking into it. There already is an Akonadi agent for CouchDB. Unfortunately there don't seem to be any openSUSE packages yet.

Yesterday there was the annual membership meeting of KDE e.V.. One of the main topics of the meeting was the election of the board. We had five great candidates for three open positions. This is an encouraging sign that KDE e.V. is in a pretty healthy state and the work we do in supporting the community is accepted and bearing fruit. In the end we elected Frank and Celeste as replacements for Aaron and Klaas. Adriaan, Sebas and me stay in the board. We prepared this for some time to have a smooth succession providing some fresh blood to the board, but also having some continuity. This seems to work out pretty well.

Finally I came across a report by Glyn Moody about the summit. He held the first keynote of Akademy, and presented an interesting line of thoughts there, explaining how hackers will save the world by bringing their culture of sharing to the greater society.

One paragraph of his text Gran Canaria Desktop Summit: a Study in Contrasts stroke my special attention:

Although it was great to see the large numbers of hackers from the GNOME and KDE communities coming together at this joint conference, I think it's vitally important that they continue to go their separate ways, each convinced that their approach is best, but each ready to be stimulated by and learn from what their colleagues and rivals are up to.

I think that nicely summarizes the atmosphere of the event. There certainly is some competition, but in the end it's motivating and stimulating for both communities and leads to better solutions for all of us.
at July 08, 2009