After blogging about Polka, my experiment with a radically new take on an address book, I got a lot of great feedback. I appreciate all the comments, questions, and encouragement. Two people made me particularly happy, as they not only sent feedback, but also contributed some welcome work. Sascha Manns built packages, and Saleel Velankar created a beautiful logo. Free software rocks.

When I started with Polka, one of the main ideas was to not do a traditional desktop user interface, but try out something more natural. One of the side thoughts was that this kind of interface might also work well on some non-desktop devices, for example on devices with a touch interface. But I didn't really know, if it would work. So I decided to try it out.
My first attempt resulted in a port of Polka to MeeGo. MeeGo is a system targeted at touch interfaces, and being Qt based it seemed to be close enough for a getting Polka to work on it. It took me a while to get a working development environment set up, but thanks to Google, and careful study of a bunch of Wiki pages, I finally was able to create MeeGo packages with QtCreator and run them in an emulator.
Porting Polka then was not a huge effort anymore. The proven approach of bundling it with a mini version of kdelibs covering only the functionality required by Polka on MeeGo worked out well again. So here is Polka Touch. 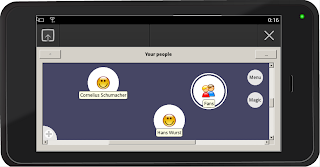 Unfortunately I didn't have a MeeGo device, and the emulator only gives a very limited impression, of how the user interface works. So I needed real hardware, and luckily I came across some cheap WeTab.
The WeTab comes with some version of MeeGo, but I didn't bother with trying to build packages for it, but installed openSUSE. Again some Googling and studying of Wiki pages was required, but then openSUSE ran on the WeTab like a charm. The WeTab might not be the greatest tablet hardware from an end user's perspective, but for a developer it's great. I even was able to compile Polka directly on the tablet. 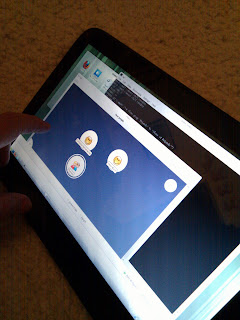 So how does Polka work on a tablet with a touch interface? It works surprisingly well. Arranging people by moving them around on the canvas feels even better than on the desktop. The menus work well, not using traditional desktop menus definitely is a win here. The dialogs for input of data, are not that great, but it should be straight-forward to adapt them to some more native method to gather data from the user. Another thing which needs some improvement is the use of the canvas background to show a menu for adding labels. This is easily activated accidentally by just touching the screen. It would be better to support scrolling the canvas with touching the background. This might even be interesting on the desktop version.
Overall I have to say it's fun to use Polka on a tablet. Still needs some tweaks, but the first experience is already quite good. It's nice, when ideas work out.
at June 05, 2011